Mesa County Fire Authority was formed in January 2022 by the combining of Lands End Fire Protection District and Central Orchard Mesa Fire Protection District.  It is led by a five-member board of directors made up of three board members from Lands End Fire and two board members from Central Orchard Mesa Fire.  It receives it operating revenue from both districts through property tax-based revenue, ambulance transport revenue and some contract services revenue meaning stand-by EMS service for special events.

It provides fire, rescue and EMS services to a rural area in western Colorado covering 221 square miles of area. According to the 2020 census there are approximately 5000 permanent residents in the area and 20,000 to 25,000 people per day traveling through or using the area.  It is comprised of farms and ranches, fruit orchards, vineyards, agricultural operations, residential areas with a mix of industrial and commercial businesses.  A very large recreation area is encompassed in the protection area known as the Dominquez/Escalante Recreation Area.  The Bureau of Land Management and Grand Mesa National Forest areas in this Authority comprise over 500 miles of off-road use areas. People inside and outside of the area come to enjoy all the recreational uses including horseback, 4-wheeler, motorcycle, hunting, jeeping, paragliding, rock climbing, mountain biking, hiking, water rafting as well as non-established and established pistol and rifle target shooting areas.  People also come to enjoy the skeet shoot club, model airplane airport and the drag car racing strip. 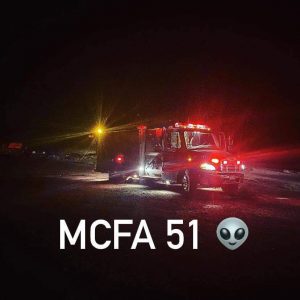 The Fire Department protects critical infrastructure in the area including two major highways and two major waterways, the Colorado River and the Gunnison River. It also protects the City of Grand Junction watershed land and reservoirs, a treatment plant, underground ammunition and explosive bunkers as well as the Mesa County law enforcement training facility with a SWAT team training area, a shooting range and driving school. Next to this facility is the fire burn tower for firefighter training used by other departments. Several critical infrastructure towers including microwave towers for communication and towers for emergency dispatch and communication.

The department currently has 25 fire and EMS volunteers.  It is considered a combination department with the Fire Chief as a paid employee and volunteers on a stipend-type pay program. In the year 2021 they responded to approximately 400 calls in the combined area.  They all train each week in one of the following areas: fire, EMS, rescue and hazardous materials training.

Currently the Authority runs out of three stations.  Plans are in the works for building a new station centrally located for the best response to all areas of the two districts.  The Authority has four ambulances, two tenders, two fire engines, six brush trucks and two command vehicles.  In addition, a side-by-side rescue ATV.

In addition to serving this area, the volunteers also provide mutual aid to the surrounding fire departments when called to do so.